Stop whitewashing child killing. It is time to boldly call abortion for what it is: an act of homicide. 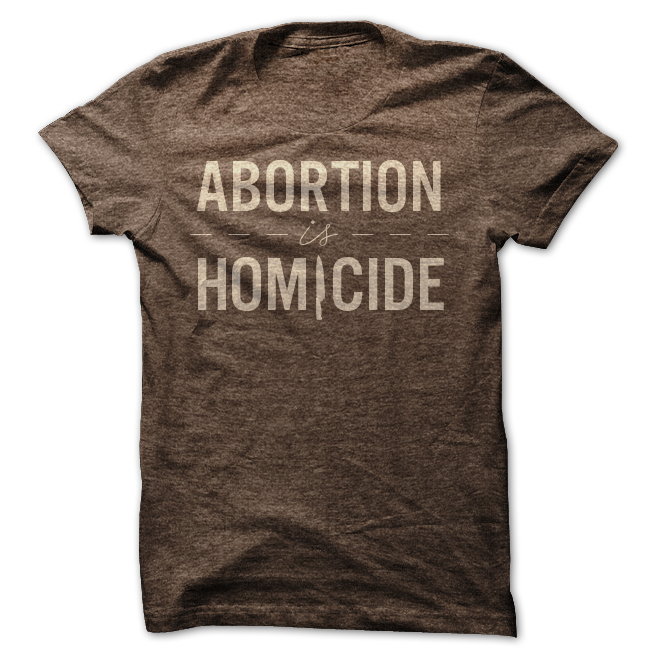 In 1997 I designed a pro-life t-shirt that became one of the biggest selling pro-life shirts of all time. Abortion is Homicide. It was such a simple, straightforward message that resonated with the youth pro-life movement. This shirt sold extremely well for many years and people continue to tell me stories about how God used that shirt to save babies and change hearts.

Something happened in the early 2000s, as it seemed that people suddenly became less bold about abortion or at least in declaring it for what it is.  I began to hear people say they did not want to wear the shirt anymore because it offended others. I have to admit that even I bought into the thought process and did not want to make the shirts anymore; I wanted to rely on a softer message.

This past January as we entered into the 41st year of legalized child killing in America, I started to think about that thought process again. Here we are, one full generation has passed and we are still ripping babies limb from limb in the womb.

Abortion is the only violent crime in which we seem to be more worried about the criminal’s feelings than the victim who was chopped into pieces. Of course I believe there is forgiveness in Christ. Of course I believe in redemption for those who have repented. But that does not change the fact that we MUST end abortion so no one has to go through that pain.

I have to say that the very fact that the “Abortion is Homicide” shirt offends people is the reason we MUST print them. People are offended because they don’t want to have to think about what abortion is. They are offended because they understand that by calling it an act of homicide it makes it a true violent crime instead of just a mistake or unfortunate choice a woman made.

If you have had an abortion, please understand that there is hope, love and forgiveness in Christ through repentance. Please understand that ministries like Rachel’s Vineyard are there to help you find that healing. Please also understand that we put this message out because of women like you who regret their choice, and are hurt by a society that has made this horrific, violent crime against God’s heritage not only thinkable, but actually pushed and supported by the highest levels of authority.

I will continue to pray for those men and women who have been hurt by abortion, but I am committed to seeing the day when this deadly lie becomes unthinkable, illegal and something we will no longer tolerate.

Don’t be offended if I call abortion homicide. Be offended that this act of homicide exists as a legally protected right in the first place.

The newly designed Abortion is Homicide shirt is available at http://www.prolifeworld.com – Available in Small – XXL