An answer to people who are asking me why we want to completely defund Planned Parenthood when they do so many other good things. 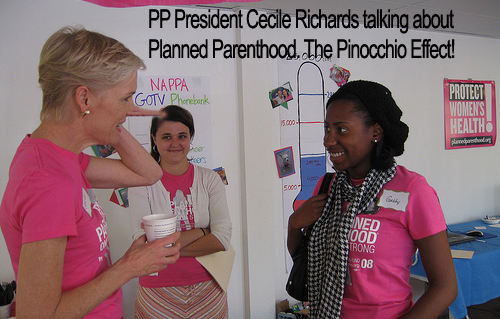 It seems many people don’t understand the full scope of what Planned Parenthood is; the name itself is so deceiving that is causes confusion.  Planned Parenthood has done a good job of painting themselves as an organization that is there to help women and keep them safe; nothing can be further from the truth.

Lets start with the something that should automatically discount everything they do: abortion.  I hate using the word abortion because it is an attempt to sanitize the act of killing a human child. Planned Parenthood also uses terminology like “terminate a pregnancy” in their attempt to dehumanize the child in the womb.

Planned Parenthood not only specializes in abortion, but they are the nation’s largest provider of abortion. In 2009 Planned Parenthood killed over 25% of the babies who were killed by abortion in the US.  They are so focused on abortion that they mandated earlier this year that all of their affiliates must provide abortion.

The fact is that even if they just killed one child per year, we should have nothing to do with them, let alone the 332,278 abortions Planned Parenthood claims to have done in 2009.  If we were talking about an organization that killed three-year-olds as part of their business, no mater how minute a part, this topic would not even be open for discussion.

How about birth control? Doesn’t Planned Parenthood offer free or cheap birth control to women who cannot afford it?  This is another question that many people have asked me lately.

There are several problems with this argument to keeping Planned Parenthood funded.  First of all, it really makes no sense to me why I should have to fund other peoples sex lives.  Planned Parenthood would argue that the government needs to stay out of people’s bedrooms, and that they have no business knowing what goes on or regulating sexual activity.  If that is the case, then how can they argue that the government should use our tax dollars to fund what goes on in the bedroom?

The other issue with this argument is that fact the much of this birth control can be abortifacient in nature, meaning it can cause early abortions. Every form of chemical birth control has a mechanism that makes the uterine wall hostile to embryos, which causes early abortions when break-through ovulation occurs.  For more detailed information on this topic go to: http://www.epm.org/resources/2010/Feb/17/short-condensation-does-birth-control-pill-cause-a/

Yes, Planned Parenthood also does provide some other services such as STD testing, although they have now renamed it STI testing.  In their pursuit to lesson the stigma of promiscuity and youth sexual activity, they now changed the term to Sexually Transmitted Infection.  The word infection, like abortion, is a sanitized and minimized term meant to lesson any stigma.

The racism was also documented in some of the first undercover stings preformed by Live Action.  Phone calls to Planned Parenthood asking to donate money to kill black babies were received happily.  Over the past several years, videos were released by Live Action showing Planned Parenthood covering up child rape, sex trafficking and pimps seeking services for 13-year-old prostitutes.

I will offer another simple analogy.

Imagine if you were donating money to your neighbor who was handing out free food for poor people in your neighborhood.  This might be one of the only sources of affordable healthy food for many people in your neighborhood.  Then one day you find out this neighbor also was giving food to several child molesters so they can keep the children they are molesting alive.  He is also killing some of the toddler children of parents who no longer want to take care of those kids.

Would you still donate to him because you wanted to make sure the good work he was doing could continue?  Would you be against law enforcement shutting him down because then those poor people could not get food?

Think about this: Planned Parenthood murders young children — over 300,000 of them in 2009.  Planned Parenthood has been caught red-handed offering help to pimps and sex traffickers and should be shut down and investigated for criminal charges.

So my answer is yes; even though there are things they do that could be perceived as beneficial or good, I want Planned Parenthood defunded and shut down. They remind me of a dentist standing out on the street corner after school handing out “free” candy every day, knowing that when the kids have tooth decay, he will recoup all of his candy expenses on their fillings.