When my son died five years ago today, I was told “It was just a miscarriage.” No! Benjamin is my son.

I share this story every year because it is important for people to understand the humanity of every child and the importance of protecting and respecting all human life, born and pre-born.

On the morning of February 23, 2011 I awoke to the scream of my wife coming from the bathroom down the hall. I jumped out of bed and ran to her, finding her standing next to the toilet bleeding. In tears she pointed to the toilet where the body of my son (approximately 12 weeks into his development) was floating. 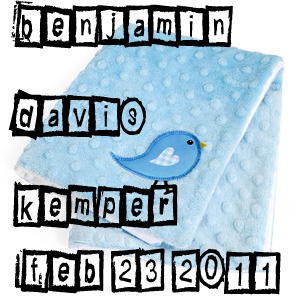 I stood in shock for a moment as we did not even know we were pregnant; the test we took weeks earlier came up negative. Then I noticed my wife was not steady and she was bleeding badly. I wrapped a towel around her to stop the bleeding and scooped my son’s body out of the toilet. I then loaded my wife into the van, as I knew driving her to the hospital would be faster than waiting for an ambulance.

When we arrived in the emergency room the attending doctor immediately called for a specialist, as he could not stop the bleeding; there was blood literally on the walls and floor. As the specialist came into the room he looked up and said, “Oh my God; is that her blood pressure?”  My heart stopped.  I have to say that was the scariest moment of my entire life as I thought for a moment I might lose my wife.

The doctor was able to stop the bleeding and my wife was stabilized. The doctor pointed to the container holding our son and said her would “take care of that.”  I told him, “No, we are going to have a funeral.” The hospital actually treated us extremely well.  They were very sensitive to our loss; I was surprised.

I called the pastor of the church we were attending at the time to tell him what happened and ask about a funeral service for our son. He did not know what to do as he had never had a funeral for a child who was miscarried.  I ended up doing all of the legwork and making the arrangements myself

That Sunday as the pastor was announcing the funeral, I was shocked when he stopped mid-announcement to make a disclaimer. He mentioned that many women in the church had gone through a miscarriage but had not chosen to have a funeral and that it was “no big deal.”  “This is just something the Kempers chose to do.” I was appalled; I could not believe that this was being said as I sat there days after the death of my child, hearing how it was “no big deal.”

That Tuesday at the funeral, other than the Pastor, his wife, intern and one another couple, no one else from our church showed up to the funeral. I remember standing near the graveside wondering why no one was there; none of the elders and most of the deacons did not come.

Later when I called the pastor and asked him why no one else showed up, he said that people did not really knew my son. I replied, “But they know my family.” I then asked him if this had been his son or any other grown kid in our church, would they have been there?  He replied, “Yes, but this was not any other funeral; it was just a miscarriage.”

I really could not believe my ears; did he really just say that about my son? Mind you, this is a very pro-life church. This is a church which supported the work I do and even financially gave to this pro-life work. How could a pastor who was so pro-life say something like this?

The answer is simple. Even those who call themselves Christian or pro-life sometimes cannot 100% understand the full humanity, the full personhood of the child inside the womb. If we did, abortion would be over.

We still see some kind of difference between the children in the womb and the children running around the streets today. We still are more emotionally distraught over the shootings in a school then the dismemberments in abortion clinics. We have not actually seen abortion for what it truly is.

I will concede two differences between the children in the womb and the children running around today. First difference is their age, what stage of life development they are in. Zygote, Embryo, Fetus, Infant, Toddler, Teen, Adult…. These are all stages of the life of a human person.

The second difference is why I am writing this story, the reason I have given more than 20 years of my life to fighting for the abolishment of abortion. It is their voice. The children in the womb have no voice; they are in need of someone to do as Proverbs 24:11 commands us to do: Rescue those who are being taken away to death; hold back those who are stumbling to the slaughter.

When those who call themselves followers of Christ, Christians, begin to recognize that abortion is actually an act of homicide, the abolition of abortion will take place. When we show the same rage and intolerance that we have for things like child molestation, rape, school shootings or any other crime against humanity, we will end this holocaust that is now over 42 years running in America.

Today, February 23rd I will visit that gravesite and mourn the loss of our son. I will look to heaven and know that he is with Christ, waiting for our family reunion one day.

While I stand at his gravesite I know I will also be reminded of the 55 million gravesites that don’t exist for all those whose lives have been stolen by surgical abortion. I will shed a tear for my nation, a nation which has turned her back on the most innocent and venerable of her citizens. I will also renew my commitment to shining the light of Christ and truth on the evil of our age, the abortion holocaust.

Will you join me in this commitment? Will you Stand True?

I know the pain that comes with losing my son, I cannot imagine the pain someone must feel after an abortion. I am blessed to work with some amazing people who are leading the way in helping to heal the pain from shockwaves of abortion. Please visit abortionshockwaves.com for more information about healing.

Stand True relies on the support of people like you to continue fighting to save lives. Please donate $25, $50, $100, $500 or any amount and help Stand True continue to educate, activate and equip this generation. If you can donate please do so at https://give.cornerstone.cc/Stand+True or on the donate button at the top of this page.