Comparing abortion to the Colorado theatre shooting, Nazi holocaust and other tragic losses of life: is it right?

To answer this question one must first answer the question: what is abortion?

In the same way, when I compare the Nazi Holocaust and the Abortion Holocaust, I am showing that they are both horrific events that have claimed the lives of millions of innocent human persons. One took place 70 years ago and one is taking place right now.

I could easily show comparisons to many other events in history such as Columbine, slavery, earthquakes and many more tragic events that have claimed so many innocent lives.

When I make these comparisons it is because, while I am grieving for the loss of those innocent lives lost in Colorado at that theatre, I am also in pain for the other thousands of innocent human person killed on the same day that so few people are crying for. I am trying to shake this world and make us realize that there are thousands of innocent human persons being murdered in buildings every day around the nation and the media are not there to tell their story.

The Planned Parenthoods and abortion clinics have successfully lulled America into silence about the bloodshed behind their doors. They have convinced so many that this is nothing more that a choice being carried out to help women. They have declared war on women and innocent children in the womb and have disguised it as liberation and freedom.

In carrying out this war on women, the abortion industry has been able to silence the outrage that should be shown towards this abortion massacre. They have been able to mask a horrific and violent action as a healthcare right that needs to be funded by our government.

I was not shocked by the responses I got from non-Christians or from pro-abortion people; I was shocked by some of the comments I got from Christians and people who identify themselves as pro-life.

I was told that calling abortion murder is judgmental and as Christians we are not called to judge. I have to ask these people if they are calling what the shooter in the theatre did can be called murder, or is that being judgmental as well?

I was told that it is just too soon to compare things like these because those people just died three days ago. While I am so very saddened by their deaths, I am also saddened that in the four days since that attack in Colorado, almost 16,000 innocent human persons have been killed in abortion clinics. Since January 22 of 1973 over 55,000,000 innocent humans beings have been killed by surgical abortion in America alone. It is not too soon; it is actually long overdue.

This graphic comparison was meant to do many things, and one of those things was to create a buzz and get abortion talked about. It worked. When abortion is being talked about and the truth is being exposed, lives are saved. One of my goals as an abortion abolitionist is to never allow abortion to fade away as a non-topic. My goal is to make it so prevalent and so front and center that this nation and the world are forced to open their eyes and see it for what it truly is. Abortion is an act of homicide and I will take every opportunity to expose this until we see the abolition of the abortion massacre.

Here is the graphic I made with the comparison: 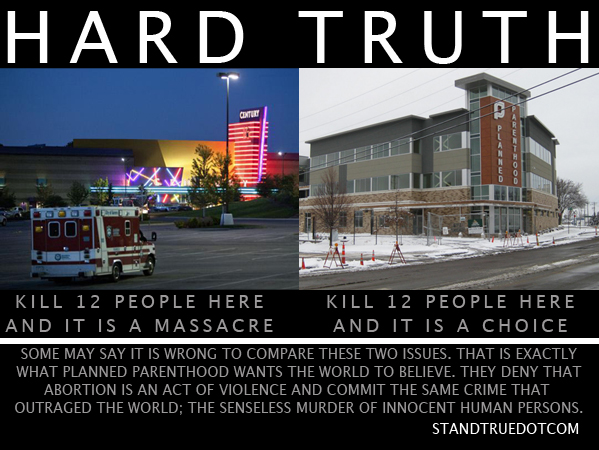