We Won Our Free Speech Law Suit Against Sinclair College Bryan Kemper Will Be Back Speaking There This Thursday, March 14

If your not familiar with the back story, here is the original article I posted when the police shut down our free speech last summer – https://www.standtrue.com/police-force-pro-lifers-to-put-signs-on-the-ground-at-rally-on-public-property-video-of-police-trying-to-grab-our-camera-while-denying-our-first-amendment-rights/ 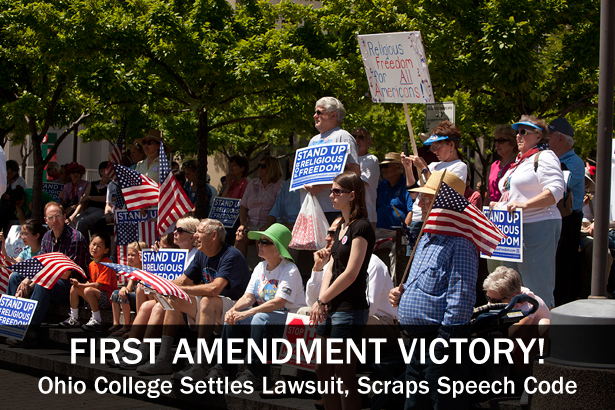 DAYTON, Ohio, March 12, 2013—Ohio’s Sinclair Community College (SCC) has settled a First Amendment lawsuit by revising an unconstitutional speech code that prohibited students and visitors from holding signs on campus. The plaintiffs’ attorneys confirmed this week that the terms of thesettlement have been accepted by the Ohio Attorney General’s Office.

The lawsuit, filed last July on behalf of students Ruth Deddens and Ethel Borel-Donohue and invited speaker Bryan Kemper, director of Youth Outreach for Priests for Life, was prompted by SCC’s brazen violation of the First Amendment at a campus religious freedom rally held on June 8, 2012. At the rally, police officers forced event attendees and participants to put away their handheld signs communicating the protesters’ message, citing the college’s speech code.

Incredibly, SCC President Steven Lee Johnson told the Dayton Daily News that the ban on signs was necessary because of “safety and security” concerns. Invoking the tragic Virginia Tech shootings in 2007, Johnson said that banning signs was justified because signs could be used as weapons, telling the Daily News that the restriction “has nothing to do with what was printed on those objects, but what those objects could be used for.”

Under the revised Campus Access Policy adopted by SCC in the wake of the lawsuit, “any person or group may use, without prior notification, any publicly accessible outdoor area” (with some exceptions) for the purposes of “speaking, non-verbal expressive conduct, the distribution of literature, displaying signage, and circulating petitions.”

“This settlement should send a clear message to colleges in Ohio and across the nation that unconstitutional speech codes aren’t worth defending,” said Greg Lukianoff, president of the Foundation for Individual Rights in Education (FIRE), which came to the students’ defense. “It’s outrageous to use the shooting at Virginia Tech to justify a blanket ban on holding signs at protests on a public campus. A ban on signs is an insult to our liberties and has no value in preventing violence on campus.”

On June 8, 2012, SCC’s Traditional Values Club (TVC) hosted a “Stand Up for Religious Freedom” rally on the SCC campus, one of more than 160 such rallies held on that day nationwide to oppose federal government mandates regarding abortion and contraception. Despite SCC’s clear obligation to uphold the First Amendment on campus, police ordered participants and attendees to put signs supporting the event on the ground, out of view. The censorship was documented with photo and video evidence.

Such censorship had apparently been taking place at SCC for more than 20 years. According to The Clarion (PDF), SCC’s campus newspaper, campus police had enforced a policy against signs at SCC since 1990, justifying this censorship through an extremely broad reading of the college’s Campus Access Policy.

FIRE wrote to President Johnson on June 15, 2012, asking SCC to disavow the censorship of TVC’s event by the SCC police and to promise never to enforce such a ban against signs in the future. SCC’s response was to ask for more time to make a decision and then to reiterate its policy.

After discussions with FIRE and the Thomas More Society, the plaintiffs filed suit in the U.S. District Court for the Southern District of Ohio with the assistance of Ohio attorneys Curt C. Hartman, Christopher P. Finney, and Bradley M. Gibson. The suit alleged that SCC, its Board of Trustees, President Johnson, and SCC’s police department maintained and enforced policies that restricted expressive activity at SCC (particularly spontaneous student speech in response to recent or unfolding events), gave unfettered discretion to administrators and the police to restrict student speech, and threatened students with disciplinary or criminal charges for exercising their First Amendment rights.

“It’s hard to believe that for 20 years, Sinclair Community College had been enforcing an absurd ban on holding signs at protests,” said Robert Shibley, FIRE’s senior vice president. “We’re glad that Sinclair Community College and the State of Ohio realized that continuing to defend a ban on signs would not just fly in the face of the First Amendment, but would also be a profound waste of taxpayer money.”

Bryan Kemper will be speaking at Sinclair this Thursday, March 14th in the Library at 1:30 and 3:30