Have you ever heard that a picture is worth a thousands words? How About the Planned Parenthood founder pictured speaking to a KKK Rally?

Some people say that a Picture is worth a thousand words. I say this picture is worth $350 Million tax dollars being taken away from Planned Parenthood as it shows the PP founder speaking at a KKK rally. Hey Democrats is this really who you want to fight for? 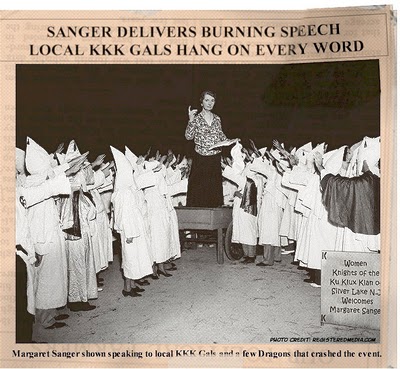 While this photo is photo shopped this video is an actual account from her autobiography from when she did speak at a KKK Rally.

The Margaret Sanger autobiography informs that “I accepted an invitation to talk to the women’s branch of the Ku Klux Klan…I saw through the door dim figures parading with banners and illuminated crosses…I was escorted to the platform, was introduced, and began to speak…In the end, through simple illustrations I believed I had accomplished my purpose. A dozen invitations to speak to similar groups were proffered.” (Margaret Sanger: An Autobiography, P.366)