Ruling on HHS mandate: “As contrary to religious freedom as you can get” 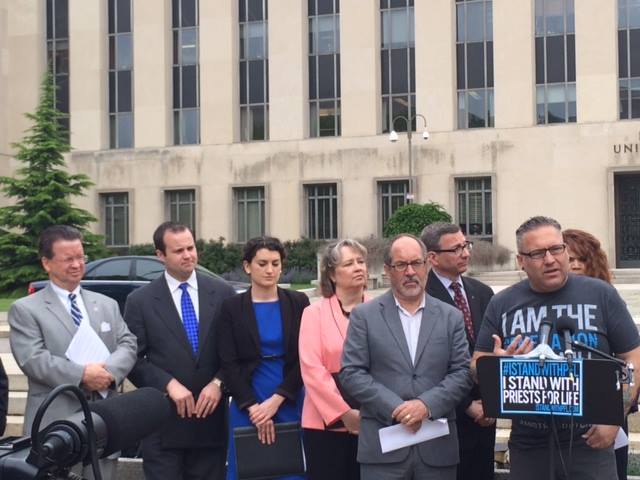 Today the U.S Circuit Court of appeals ruled against religious freedom and we at Stand True would rather risk arrested and imprisoned before we comply with their evil mandate. – Bryan Kemper

Fr. Frank Pavone, National Director of Priests for Life, issued the following statement today to the decision from the U.S. Court of Appeals for the D.C. Circuit, which ruled against Priests for Life’s challenge to the HHS mandate in the case Priests for Life et al. vs. US Dept. of HHS et al.

“As we have said from the beginning, Priests for Life will not obey the HHS mandate. To ask a group of priests to cooperate in the government’s plan to expand access to birth control and abortion-inducing drugs is about as contrary to religious freedom as you can get.

In the interim, the government has provided what it calls an ‘accommodation’ by which we opt-out of the obligation to provide such coverage. In principle, of course, this moves in the right direction. The conscience of every American should be accommodated by law, so that government never forces anyone to violate his or her conscience.

But the problem at issue in our case — in which the Archdiocese of Washington, Catholic University of America, Thomas Aquinas College, and other plaintiffs are also joined — is that the mechanism the government has provided for us to opt out is, in itself, objectionable to our religious and moral convictions. We have been pointing this out from the outset of this case.

Today’s decision states that our moral objection to the government’s current ‘opt-out’ mechanism is not their problem.

What it boils down to is this: the government finds it hard to believe that we are objecting precisely to an action that lets us opt out of its plan to make it easier for our employees to get contraceptives and abortion-inducing drugs.

But the court’s own words today show why we object. The following two paragraphs from the decision capture why we continue to object and why we will not obey the regulations:

“Once the eligible organization expresses its desire to have no involvement in the practice to which it objects, the government ensures that a separation is effectuated and arranges for other entities to step in and fill the gap as required to serve the legislatively mandated regime.”

“Only if the eligible organizations communicate that they are dropping contraceptive coverage from the health insurance they have arranged for their employees will the government be able to ensure that the resultant gaps in employees’ coverage are otherwise filled. The government contends that its interests would be impaired if eligible organizations were entitled to exempt themselves from the contraceptive coverage requirement without notifying either HHS, or their insurers or TPAs.”

That’s the point. We refuse to take actions that are necessary to help the government “fill the gap” to provide drugs that kill babies and harm women. This decision admits that the action they are asking us to take does precisely that and is in fact necessary for that to happen. Therefore we will continue to refuse to obey the regulations, and we will appeal this decision to the Supreme Court.”

Janet Morana, Executive Director of Priests for Life and a personal plaintiff in the case added, “This decision praises the so-called benefits of contraception as if its well-documented negative health risks did not exist. Our objection to be any part of the government’s plan to make contraception more easily accessible is grounded not only in our respect for conscience and religion, but precisely in our regard for women and their health. The Pill, IUDs and sterilization devices like Essure are harming women every day.”

Alveda King, daughter of Rev. A.D. King, niece of Dr. Martin Luther King Jr., full-time director of African-American Outreach for Priests for Life, and also a personal plaintiff in the case, added, “In the interests of civil rights, which include the right of conscience to practice one’s faith regardless of how the government wants to define it, we will continue to pursue this case at the level of the Supreme Court. If my Uncle ML were still around, I have no doubt that he would be fully supportive of our efforts to secure freedom for every American to have his or her conscience free from government intrusion or reinterpretation.”

>Robert Muise of the American Freedom Law Center, which represents Priests for Life in this case, stated, “This decision by the D.C. Circuit, a court that was recently packed by Obama through Harry Reid’s nuclear option, totally disregards the meaning of material cooperation as our Church teaches it.  No doubt, contraception is a sacrament of the secular left, and this decision, which was authored by one of the recent Obama-appointed judges, is a tribute to it.  Make no mistake, this battle is not over.  We will continue our fight for religious freedom by challenging this decision in the U.S. Supreme Court.”

For more information on this case, on Priests for Life’s response, and what you can do, see IStandWithPFL.com.