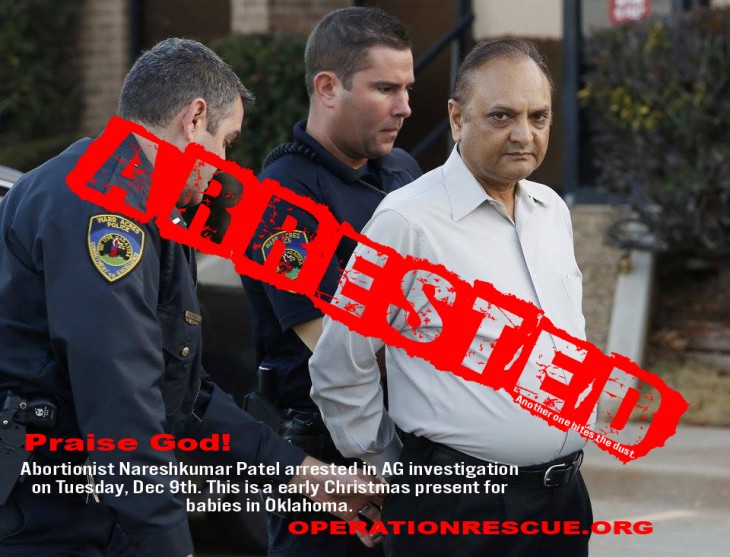 A millionaire abortionist in Oklahoma was removed from his office in handcuffs today.Dr. Nareshkumar Patel, 62, who kills unborn children at Outpatient Services for Women in Oklahoma City, has been arrested and accused of prescribing abortion-inducing drugs to women who were not pregnant, according to a press release from the office of Oklahoma Attorney General Scott Pruitt. Authorities began an investigation after Operation Rescue filed a complaint based on documents and medical waste that had been discarded in a trash receptacle near Patel’s office.

Patel is notorious for having burned the bodies of 55 babies in 1992 in an abandoned RV he owned and for allegations that he sexually assaulted three women as they awaited their abortions.  He has faced a long list of malpractice claims but has never had his license permanently revoked.

Commenting on Patel’s arrest, Father Frank Pavone, National Director of Priests for Life, noted his organization’s close collaboration with Operation Rescue and said, “Those who kill babies do a lot of other evil as well. Working with Operation Rescue and Life Dynamics, and in our own initiatives at Priests for Life, we have found that the more you dig, the more you find.”

“I have seen hundreds if not thousands of pro-lifer put into handcuffs over the past 20 years for laying their lives down for the sake of innocent babies in the womb. To see an abortionist taken away in handcuffs really makes me smile as I know that precious children will not be killed in abortion mill right now”, said Bryan Kemper, President of Stand True Pro-life Outreach. “This is a great early Christmas present to the pro-life movement and to the babies who will now live”

“Exposing the corruption of the abortion industry can lead to closing abortion mills and putting abortionists out of business, without needing to change a single law,” Father Pavone added.

Operation Rescue President Troy Newman said “We are very excited about this morning’s arrest. This is the result of a collaborative effort that involved gritty pro-life work, active enforcement of state laws.”