Ohio College Sued for Censoring Pro-Life Event – Bryan Kemper of Stand True and Priests for Life is a Plaintiff in this lawsuit. 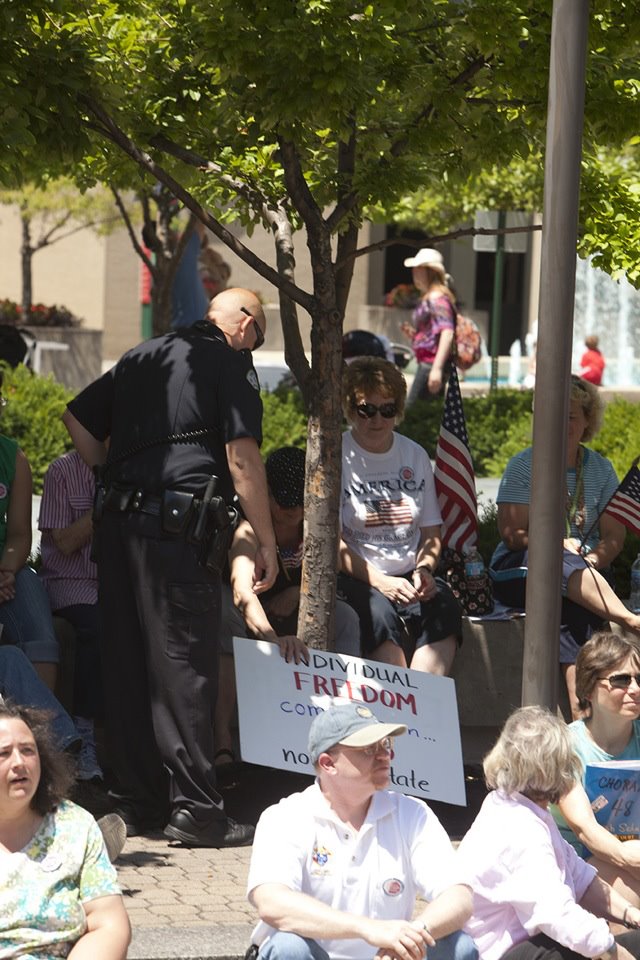 Police Demanding We Put Our Signs Down

“Sinclair Community College’s censorship is so plainly unconstitutional that it’s difficult to understand how campus police and administrators justify it even to themselves,” said Robert Shibley, Senior Vice President of the Foundation for Individual Rights in Education (FIRE), which has come to the students’ defense. “Now they’re going to have to try to justify it in court.”

On June 8, SCC’s Traditional Values Club (TVC) hosted a “Stand Up for Religious Freedom” rally on the SCC campus, one of more than 160 such rallies held on June 8 to oppose new mandates dealing with abortion and contraception. Despite SCC’s clear obligation to uphold the First Amendment on campus, police ordered participants and attendees to put signs supporting the event on the ground, out of view. Photo and video evidence documents the censorship.

Such censorship has apparently been taking place at SCC for more than 20 years. According to The Clarion, SCC’s campus newspaper, campus police have enforced a policy against signs at SCC since 1990, justifying this censorship through an extremely broad reading of the college’s Campus Access Policy.

FIRE wrote to SCC President Steven Lee Johnson on June 15, asking SCC to disavow the censorship of TVC’s event by the SCC police and to promise never to enforce such a ban against signs in the future. SCC’s response was simply to ask for more time to make a decision. In the meantime, however, SCC’s policy has already further prevented TVC from protesting the United States Supreme Court’s recent health care decision in a timely fashion.

“Twenty-two years of censorship is absolutely inexcusable, and Sinclair’s persistent delay has now prevented yet another protest,” said FIRE’s Shibley. “The time for delay is over.”

After discussions with FIRE, the Thomas More Society, working with Ohio attorneys Curt C. Hartman, Christopher P. Finney, and Bradley M. Gibson, has brought a lawsuit against SCC in the U.S. District Court for the Southern District of Ohio. The suit was filed on behalf of students Ruth Deddens and Ethel Borel-Donohue, along with invited speaker Bryan Kemper. It alleges that SCC and its Board of Trustees, college president Steven Lee Johnson, and SCC’s police department maintain and enforce policies that restrict expressive activity at SCC (particularly spontaneous student speech in response to recent or unfolding events), give unfettered discretion to administrators and the police to restrict student speech, and threaten students with disciplinary or criminal charges for exercising their First Amendment rights.

Bryan Kemper, Youth Outreach Director for Priests for Life said, “It is imperative that we fight for our rights to not be taken away or it will be almost impossible to fight to get them back. I am fighting this injustice not just for me, but for my son Jaemison who was there watching the rights so many being trampled.  Jaemison may only be seven years old, but he and his and his siblings will some day face a situation when their rights and liberties may be challenged.  I want them to have the courage and the means to stand true when that day comes and if know that his father refused to cower in the face of adversity.”

This is not the first time FIRE has battled First Amendment violations at SCC. In 2011, FIRE contacted SCC after it told student Ethel Borel-Donohue that SCC policy prohibited her from distributing flyers about abortion, birth control, and breast cancer to fellow students after class. SCC cited the very same Campus Access Policy at issue in the new lawsuit, which prohibited distribution of literature in “working areas” including classrooms, regardless of whether class is in session or not. SCC’s Board of Trustees promised to review its policies in May 2011, but no changes have been made more than a year later.

Read the original story we posted on the day of the event – https://www.standtrue.com/police-force-pro-lifers-to-put-signs-on-the-ground-at-rally-on-public-property-video-of-police-trying-to-grab-our-camera-while-denying-our-first-amendment-rights/