Phil Robertson of Duck Dynasty was fired because of the cowardice of Christians to speak the truth about sin. 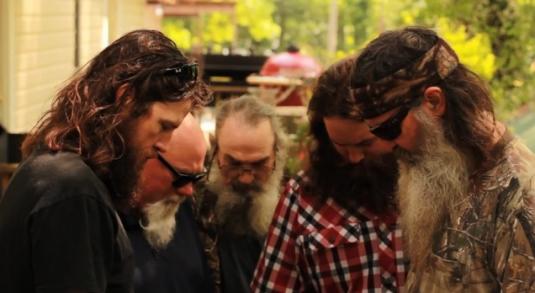 The irony of this news is that last night I sat down and watched my first episodes of Duck Dynasty to see what all the buzz was about and why my kids wanted Duck Dynasty stuff for Christmas. I was pleasantly surprised to see the prayer led by Phil Robertson at the end of each episode, and how he talked about his wife of 50 years.

This morning on Facebook I saw a post from my friend Troy Newman of Operation Rescue about Phil Robertson getting fired. He was fired from network for speaking about homosexuality. Phil simply stated his views about homosexuality and sin; he quoted the Holy Scriptures to support his Christian belief.

Why was he fired? He was fired because Christians have retreated into a state of “I don’t want to offend anyone” attitude about sin. Christians would rather send a fluffy love message than proclaim that abortion is murder or that homosexuality is a sin. We have become pansies.

Christianity has become so watered down as to make it palatable for the world that it has ceased to be Christianity in many ways.  The problem is that God’s truth never changes, never waivers and cannot be altered to make someone feel accepted in their sin. Sin is sin and truth is not relevant. Truth is absolute.

Please understand that I would never condone hating a person. We must love everyone, but loving someone does not mean we accept their sin. I love my children but that does not mean I do not correct them or warn them when they are in danger of harm or the occasion of sin.

I so often hear people tell me they do not want to wear a pro-life t-shirt or speak out against abortion because they don’t want to offend someone. People will say that standing in front of an abortion mill and pleading with men and women not to kill their child is hatred.

I can think of no more loving or Christian thing to do in a situation where parents are literally taking their own child into a building to have them killed, than pleading with them to turn back from the slaughter.

Phil was not making jokes about homosexuals; he was not mocking them on the Duck Dynasty show. Phil Robertson was directly asked about sin and homosexuality.  Phil then explained his views and his faith in that interview and is now being persecuted for his standing by his faith. He did as we as Christians are commanded to do, he proclaimed the Gospel and is being hated for it.

This persecution is easy because for so many years we have been tickling the ears of the masses with “Christianity light.” We have been so afraid of offending anyone that we have offended the very God we are trying to represent with our silence and fear.

Let’s take this outrage over Phil Robertson getting fired and start speaking up with the same passion and conviction that the LGBT community does. Let’s start talking about abortion as if we actually believe that over 55 million babies have been MURDERED.

It is time that we stop retreating and altering the truth of God and start speaking  with the boldness of Christ and His disciples. If we are silent about sin, is that not the same as condoning it? Are we more afraid of the world and what the world thinks of us than we are of the God we claim to love?

If you are angry about Phil Robertson getting fired, ask yourself if you have spoken up or hidden in silence?