UPDATE: Planet Fitness released this statement to me a few minutes ago – “At Planet Fitness, we are committed to providing a comfortable and welcoming environment for everyone. The majority of Planet Fitness clubs, including this location in Orange City, FL, are owned and operated by individual franchisees. The dress code policy is enforced at the discretion of club staff and the local franchisee.”  McCall Gosselin, Director of Public Relations 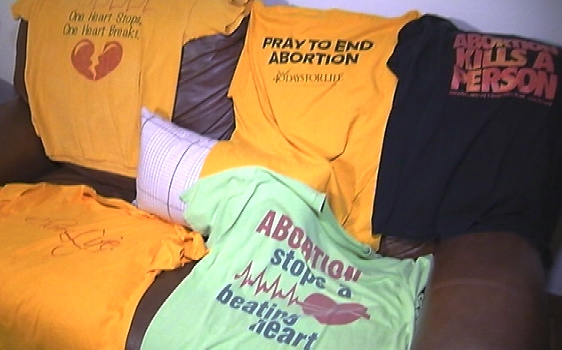 I just got off the phone with Michael Amarosa, a 68 year-old man from Deltona, Florida who was recently kicked out of the local Planet Fitness for wearing a pro-life t-shirt to work out in.

Michael has been going to Planet Fitness for three years and about two weeks ago was approached by one of the staff as he was working out. The staff member informed him that his shirt was offensive to someone and asked if he would be willing to change into a shirt she had in her hand. Michael said no and asked what would happen if he did not change his shirt. He was asked to leave.

Now before I go on, lets look at the slogan for Planet Fitness: “Welcome to Planet Fitness. Home of the Judgement Free Zone®”. That’s right, Planet Fitness wants people to think they are a “judgement free zone” while casting judgement on Michael for a pro-life t-shirt.

Michael’s shirt read, “abortion kills a person” and he thought that if he wore a less abrasive shirt that maybe they would not cast judgement on him. He was wrong. Michael came back the next day wearing a shirt that read, “pray to end abortion” and he was approached again and asked to leave.

Michael told me how he was inspired by Father Frank Pavone of Priests for Life who encourages people to be open with their pro-life beliefs. He wants to educate the public about abortion and thats why he wears his pro-life t-shirts. Michael is not yelling at people or trying to start debates in the gym, he simply works out and practices free speech with a t-shirt.

I encouraged Michael and thanked him for his courage and told him that Stand True will be sending him a bunch of free pro-life t-shirts from our store at prolifeworld.com and told him about what happened recently when TLC censored the Duggar’s pro-life t-shirt on the show, 19 Kids and Counting.

Anyone who knows me, knows I am just like Michael as I love to wear pro-life t-shirts everywhere I go. I have had the opportunity to witness to countless people because of them and I also wear them to the gym almost every day. We must be bold in our opposition to abortion and Michael has shown us courage with his stand. He is an inspiration to me and so many for his willingness to be a constant public witness for life and for the babies.

I am in the process of contacting pro-life lawyers for Michael to help him fight Planet Fitness and get his rights back. In the mean time I need you to help us fight for Michael.

Especially in light of their statement we should all contact the local Planet Fitness.

Please contact Planet Fitness in Orange City Florida and express your disgust with how they treated Michael: