Planned Parenthood is panicking, here is their “urgent” action letter. 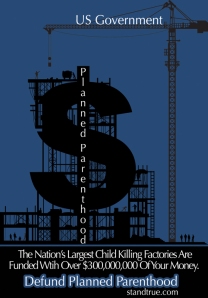 This letter from the President of Planned Parenthood should energize us for the next 10 days as the Senate will decide on whether or not to strip over $300,000,000 from Planned Parenthood. I can guarantee that PP is working triple time because they know their funding in on the line, which makes it even more important for us to keep the fires burning hotter under the Senate.

A few people has told me their Senators have already decided that they will vote against Defunding Planned Parenthood; this is not reason not to call them as often as possible. They must know how important this is to us. They must know we are serious. If Abby Johnson’s heart can be changed, so can theirs. Don’t ever give up; God can turn anyone’s heart.

The next 10 days will decide the future of Planned Parenthood.

And at the end of those 10 days, every single one of us who cares so deeply about the millions of women, men, and teens Planned Parenthood health centers serve will ask ourselves, “Did I do everything I could to protect this irreplaceable organization from these devastating attacks?”

I am determined to say yes. Absolutely, unequivocally YES. I’m counting on you to agree — so, if you can, please help by making an emergency contribution to the Planned Parenthood Action Fund today.

Yesterday, after the House of Representatives voted to bar Planned Parenthood from all federal funding for any purpose whatsoever, we didn’t waste a single moment. Instead, we did what we do best: we kept going.

The work that lies ahead of us as the bill moves to the Senate for consideration is nothing short of astonishing. We need your help to rise to this incredible challenge.

You are a vital part of the plan. Your actions, your voice, and right now, your generous emergency contribution are what will make the difference in stopping this attack on funding for birth control, lifesaving cancer screenings, HIV testing, and other essential care.

You know just as I do that Planned Parenthood has been the target of persistent attacks for most of our 95 years, and nothing — nothing — stops us from standing strong to protect and promote women’s health day in and day out. But we’ve never seen anything like this. The bill to bar Planned Parenthood from federal funding is part of an unbelievable and unrelenting campaign meant to shut down Planned Parenthood health centers and deny women access to basic health care. We can stop it — and we must.

Thank you so very much on behalf of Planned Parenthood — and the women, men, and teens who are counting on us — for your actions thus far, for the actions we will ask of you in the days ahead, and for your emergency contribution today. You are amazing.

Don’t just be happy that they are squirming, get motivated. Here is what you need to be doing for the 10 days:

1) Urgent: Invite your friends and family to call your Senators! – http://www.senate.gov/general/contact_information/senators_cfm.cfm

You can send letters/emails here: http://www.senate.gov/general/contact_information/senators_cfm.cfm Urge them to defund Planned Parenthood by supporting the Pence Amendment.

It is vital that we call our Senators to keep the pressure on. Can you beat our record call time of 1.5 minutes? http://www.senate.gov/general/contact_information/senators_cfm.cfm

2) Social Media: We urgently need you to continue to post and spread the truth about Planned Parenthood’s cover-ups. The public needs to know that Planned Parenthood routinely ignores sexual abuse, statutory rape and sex trafficking. Will you spread the word on YouTube, Twitter and Facebook? Video links can be found at: http://www.liveaction.org/traffick and http://www.liveaction.org/monalisa

My parents remember what they were doing the day that John F. Kennedy was shot. I remember what I was doing on the day Ronald Reagan was shot. The pro-life youth of America are going to remember the day the nation’s largest child-killing organization lost its federal funding. Today we saw the courage of the House of Representatives as they took the first step to eliminate hundreds of millions of taxpayer’s dollars being spent on the destruction of this generation. We cannot slow down; we must now let the Senate know it is imperative that they do the same. We must defund Planned Parenthood now.

For Christ I stand,
Bryan Kemper