I got an e-mail from Lila Rose today asking me to do some fun with photoshop magic on the Planned Parenthood Pink Bus, this was a fun project. I will be joining Lila tomorrow in Toledo, OH for the second day of the tour.

Planned Parenthood isn’t very original – they are trying to copy the pro-life bus tour Live Action has launched with the Susan B. Anthony List.

They even have their own “Big Pink Bus” which will be following around the pro-life bus. (I have to say I like what I saw someone rename their bus on Twitter – the “PeptoBus” … because what Planned Parenthood does should make us sick to our stomachs!) Anyway here is a photo of it:

Of course, Planned Parenthood left out all the important statistics about what they really do, so Bryan Kemper made his own versions of the PeptoBus that more accurately reflects reality: 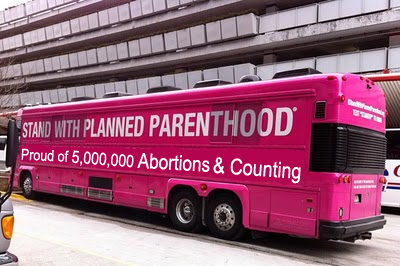 As you can see, this updated version has the really IMPORTANT statistic included: Planned Parenthood has performed 5,000,000+ abortions since they began.

All this got me thinking – what do you believe are the real facts about Planned Parenthood? What do you think are they trying to hide that you want to see exposed and the public made more aware of? With that question in mind…

We know the facts and truth are on our side, so let’s let Planned Parenthood “speak for itself”!

Which Pepto bus do you like better, their version or mine?