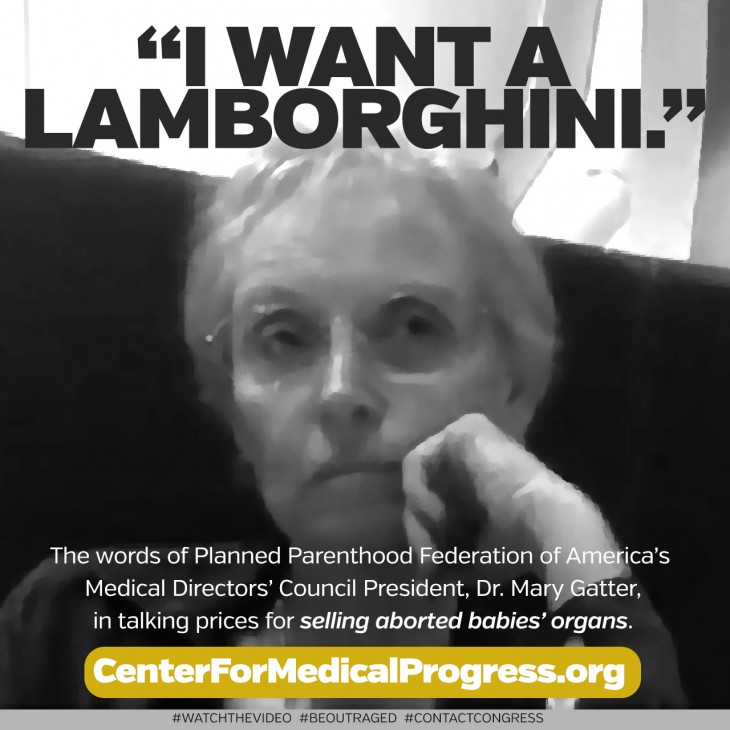 “Why don’t you start by telling me what you’re used to paying?”, Dr. Gatter asks, and the conversation proceeds with a back and forth about the amount of money that would be appropriate for selling the parts of aborted babies.

Dr. Gatter hesitates to be the first to give a figure, because she says she doesn’t want “to low-ball it.” The discussion concludes with her assertion, “I want a Lamborghini.”

Meanwhile, federal law states, “It shall be unlawful for any person to knowingly acquire, receive, or otherwise transfer any human fetal tissue for valuable consideration” (42 U.S. Code 289G-2)

Dr. Gatter also makes it clear that she is willing to see if the abortion procedure can be adjusted in order to insure that intact organs are obtained. She admits that this violates the promise Planned Parenthood makes to patients that the procedure won’t be changed in any way just because they agree to donate the body parts of their babies.

Fr. Frank Pavone, National Director of Priests for Life, will be publicizing the video today, made by the Center for Medical Progress, and stated, “This is the second of more videos that will be released in the coming four or five weeks, showing how morally corrupt Planned Parenthood is. Priests for Life will assist members of Congress as well as public officials on the state level in upcoming investigations into the extent to which Planned Parenthood officials, at the highest level, have broken state and federal law. Meanwhile, in the light of what they do to kill children and sell their parts, it is clearly immoral to give any support or transact any business with Planned Parenthood.”

Bryan Kemper, President of Stand True Pro-life Outreach said, “Planned Parenthood has been known by the pro-life movement as the monster they are, and now the world is starting to see the mask ripped off and their hideous nature revealed. The abortion holocaust is disgusting in so many ways and these videos expose Planned Parenthood as the modern day Dr Mengeles they are.”