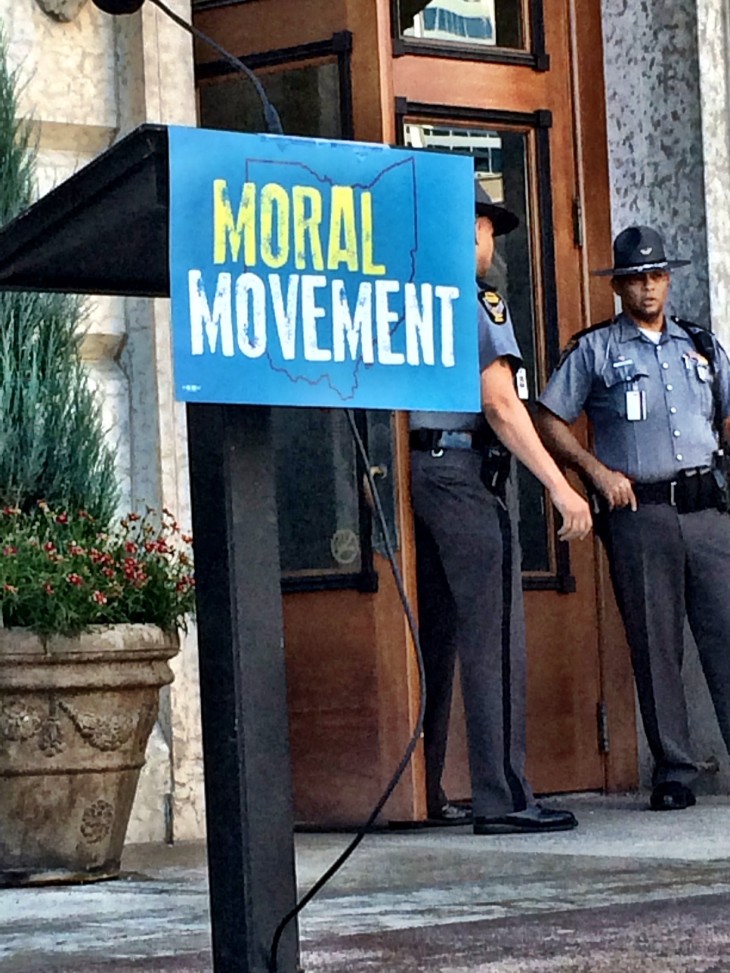 When I arrived at the Ohio State House yesterday afternoon I was already skeptical about a prayer vigil that was being advertised by Planned Parenthood. I did not really expect to hear anything remotely biblical.

I walked up to the steps of the State House with my pro-life signs and noticed the sign on the podium immediately. It read, “Moral Movement”.  Are you kidding me? How can any movement that includes the nation’s largest child-killer call itself moral?

Mark Harrington, of Created Equal, and I began to set up the signs we brought to show Planned Parenthood and their supporters what they are actually supporting.  Joined by several local pro-lifers from Dayton and Columbus, we got our display set up but were told to move back several feet because of the permit. 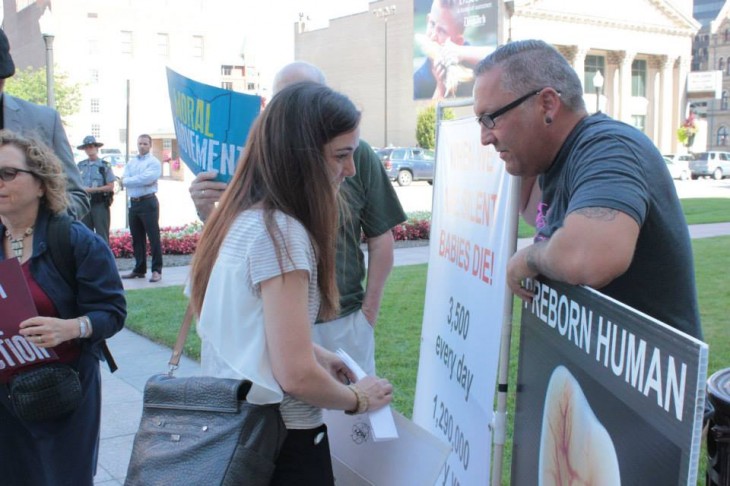 I was pulled aside by the permit-holder who was wearing an “I heart Jesus” sticker on her shirt; I was for a brief moment thinking she was going to tell us that she did not want Planned Parenthood there and that we were welcome. I was wrong.

She explained to me that they were welcoming all people to this prayer vigil and that she did not want our “dead baby” signs there because they were divisive. I tried to explain to her that Planned Parenthood was killing innocent human beings and that was more divisive than anything. I tried to explain to the minister standing next to her, wearing a collar, that abortion kills innocent children. He just smiled and said, “That’s your opinion.”

I asked her about the other signs they were allowing in the permitted area and she told me as long as there were not aborted baby pictures on the signs, it was fine. I quickly got signs with just words and stood there at the rally. Seth Drayer from Created Equal brought over a sign with a beautiful life development picture on it, but she quickly came over to tell me that sign was not welcome either. 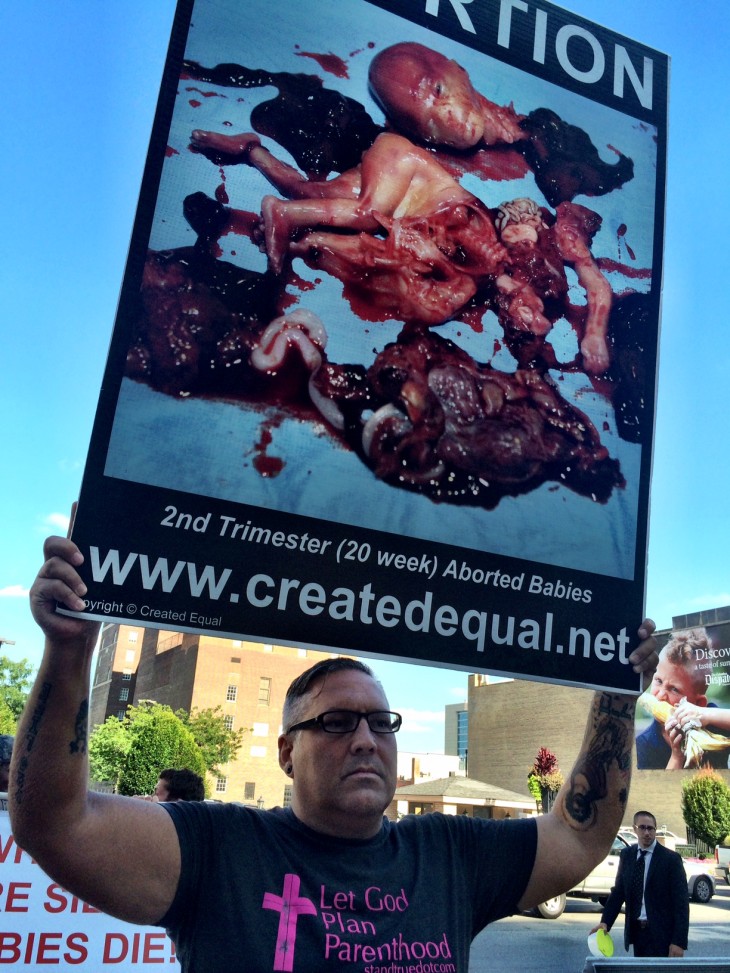 I asked her what were the qualifications for leading prayer and she said you have to be a minister. I explained to her that we had a minister with us who would love to lead some prayer. She of course rejected this idea and just walked away.

I was getting frustrated as I listened over and over to these “ministers” leading prayer and not once did a single one of them mention the name of Jesus. I am not exaggerating. There was not one single mention of Jesus during an hour of prayer. I watched as Planned Parenthood workers held hands and bowed their heads in prayer for “equality for the most vulnerable.” I listened to them quote Martin Luther King, Jr. and I was outraged. I just could not stand silent anymore, so I began to preach.

One of the ministers again mentioned “the most vulnerable” and I shouted out, “what about the babies, what about the innocent human babies that Planned Parenthood butchers every day?” I held the photo of an aborted baby high over my head and asked over and over “what about this human being?”

They paused for a moment but then tried to talk through me. My friends Mark Harrington and Mark Wolf then began to join me as we took turns asking them if they were going to stand up for the babies who are being slaughtered. I held up a picture of Tonya Reeves and asked where her justice was.

They were using a sound system but we were loud and determined for them to hear the truth. I pleaded with them to repent and turn to Christ and warned them that their prayers were an abomination to God. 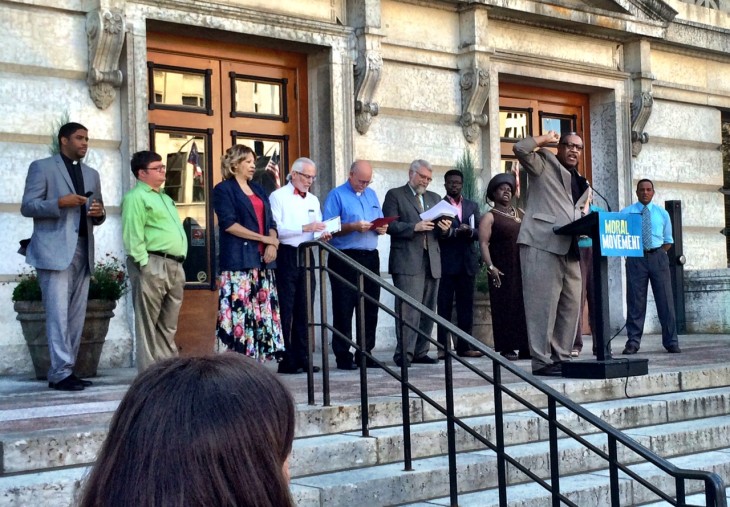 They proclaimed that this prayer vigil was inclusive for all Christians, Muslims, gays and lesbians… But of course there was not one mention of the innocent human beings being slaughtered in the abortion mills across America. One person even told Mark Wolf “killing pre-born humans is a narrow focus, not worthy of their prayer.”

One minister talked about the violence in Ferguson, MO, claiming he was standing there in the streets just days ago in fear. He incited the crowd by claiming that “the militarized police were hunting them down,” referring to black people. I yelled out, “What about the violence against babies at Planned Parenthood?” I held up a photo of Tonya Reeves again and begged him to stand up for this black person who was killed by Planned Parenthood.

The truth may have not been preached or prayed at the podium yesterday, but all in attendance heard it. The “ministers” never mentioned the name of Jesus but it was heard by all of them. God was weeping as they made a mockery of Him, but I am confident that He rejoiced when we shared the truth and boldly proclaimed Christ to the crowd. 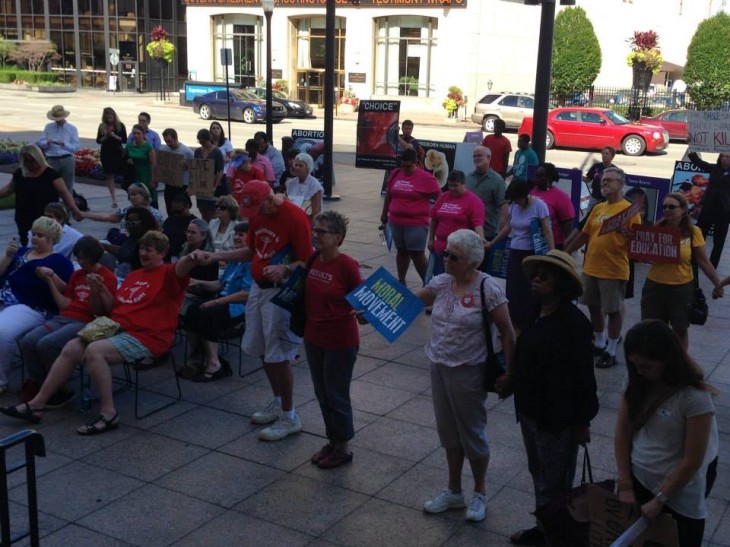 As we packed up the signs at the end of the rally we found out that our preaching did not fall on deaf ears. A couple of people approached us asking for information about abortion and about the racial targeting of the abortion industry.

I began to drive away to go celebrate with everyone at an abortion mill in Columbus that announced that day that they were quitting abortions, when I noticed Stephanie F. Kight, the CEO of Planned Parenthood Ohio walking down the street.  I asked her to turn to Christ and find hope in Him; she just chuckled and continued walking.

We will be praying for all of those in attendance to truly find Christ and know what true justice and love in Him means. We must continue to show them the truth, proclaim the Hope that we have in Christ and pray for them. Through Christ we can build a culture of life and defeat the gates of Hell.

If you support the work of Stand True and want to see us continue to bring the Light of Christ and the truth about abortion to the gates of Hell and the world, please consider making a donation today.

Can you donate $25, $50, $100, $500 to make sure we can keep these missionaries on the road? –Please click on the donate button on this page and make the most generous donation you can at this time.

Here is a video of some of yesterday’s “prayer vigil” –