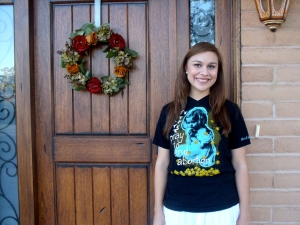 An Arizona college student who stopped in at her workplace wearing a pro-life tee shirt ended up quitting her job rather than obey a supervisor who ordered her to turn the “Pray to End Abortion” shirt inside out.

Renise Rodriguez, 21-year-old religious studies major at the University of Arizona, worked as a Girl Experience Associate for the Girl Scouts of Southern Arizona. When she went to her office during her off-duty hours to prepare materials for a meeting, she was told twice by a supervisor that if she planned to stay in the office, or attend a troop meeting, she would have to turn her shirt inside out.

“I started to get emotional because of the way I was treated so I left without preparing for the meeting and told my co-worker that she would have to get the stuff together,” Miss Rodriguez said. “As I was driving out, I called a friend crying and told her the story. I was so shocked at the way I was treated. After contemplating it for the rest of that day, I decided to write my letter of resignation.”

Her letter did not specify her reason for resigning, but she plans to discuss it with another supervisor when she does her formal exit interview.

“It is the courage and conviction of young people like Renise that gives us hope that we are closer than ever to winning this battle and bringing an end to child killing in America,” said Bryan Kemper,  Director of Youth Outreach for Priests for Lifer of Stand True. “Priests for Life is committed to educating, activating and equipping young people to be a voice for life and young heroes like Renise prove this generation is a pro-life generation.”

“What does the pro-life movement need the most right now? It is not large numbers of people who believe abortion is wrong; it is a small, courageous band of people who are willing to risk and sacrifice everything to end abortion,” he said.  “Renise is exactly that kind of person, who has not only the right attitude about abortion, but the passion it takes to make the protection of the unborn our number one priority! Our Youth Outreach, and all the branches of our Priests for Life/Gospel of Life Ministry, will continue to instill this spirit in those we serve.”

Noting that the shirt in question is one Stand True’s original design, Kemper said, “We Will be sending her several more of our pro-life shirts to help her stand up and be a voice wherever she is.”