Members of the Survivors Campus Life Tour were arrested yesterday during a lawful pro-life outreach at a public high school. It does not matter whether you agree with using graphic abortion images or not, this is a violation of their civil rights and an attack on free speech.

The Survivors was founded by Jeff White who is also my mentor and the co-founder of Rock for Life with me. Jeff is the reason I started in full time pro-life work almost 20 years ago; he is an inspiration to so many young pro-lifers. The Survivors is truly one of the most important youth pro-life organizations in the world. These are my roots.

As Youth Outreach Director for Priests for Life, my job is to help educate, activate and equip young people to be a voice for life in this culture of death. When courageous young people like the Survivors are arrested for standing up for life and practicing free speech we must be outraged. We at Priests for Life stand by the Survivors, they are an inspiration to young pro-lifers around the world.

Father Frank Pavone, National Director of Priests for Life said, “Those who are persecuting these brave young pro-life activists are cowards, and a good example of what is wrong in our culture today. I consider the Survivors to be a movement within the pro-life movement, inspiring all of us to give ourselves more generously  for the unborn. Sometimes that means arrest and prison, not for doing wrong, but for standing up against wrongdoing.”

Here are the reports coming in from the Survivors Facebook Page and some action items you can do to help these young, brave pro-life warriors. We will keep adding updates as they come in.

BREAKING NEWS: Survivors arrested in Jackson, Mississippi! The Campus Life Team were arrested for standing on a public sidewalk in front of Murrah High this afternoon. Moments after arriving at the campus to share the message of Life, Kristina Garza and Brianna Baxter were handcuffed and taken to the county jail while two more members had their signs and lit taken from them and were forced across the street. Please pray as the Survivors continue standing for their first amendment rights in this situation! We will keep you updated.

LOCAL NEWS: As quoted in this news article from WAPT, the superintendent of Jackson Public Schools and local law enforcement say they had “no recourse but to arrest the demonstrators,” claiming the Survivors were trespassing and creating a safety issue. The Survivors were on a PUBLIC SIDEWALK when they were arrested, peacefully handing out literature and holding signs. Murrah, the only safety issue we see is your administration endangering our right to freedom of speech.

KEEP THE CALLS GOING! Survivors have just found out that Jackson PD is holding the team because the Campus Enforcement will not release the paperwork. The more calls coming into the booking office, the faster they will move to get that paperwork! PLEASE CALL 601-857-4800, request to speak with Deputy Williams (booking deputy), ask him why they haven’t released the young pro-lifers arrested early this afternoon!

UPDATE: Jackson PD kept Kristina Garza and Brianna Baxter in the county jail all night after unlawfully arresting them yesterday afternoon for “disorderly conduct” and “interfering with a bus driver.” BOTH FALSE CHARGES. The Survivors were handing out literature on a public sidewalk — an activity that is well within their rights as citizens and which poses no danger to anyone around them. Kristina and Brianna will go before the judge at 9 AM this morning. PLEASE KEEP THEM IN YOUR PRAYERS!

Update 10:25 AM Both Kristina and Brianna are being held on $2000 bonds each. They were not put on the court docket today but the rest of the team is trying hard to get them added to this afternoon’s docket.  Please pray that they get in front of a judge this afternoon and do not have to spend anymore time behind bars.

Update 2:30 PM Both Kristina and Brianna are being RELEASED! The judge has decided to release both of the Survivors, trusting them to show back up for a court hearing on April 6th. We are praying that the charges are dropped before that date.

Update: 6:30 PM Here is the official press release and video of the arrests:

Here is a photo of the girls in court. 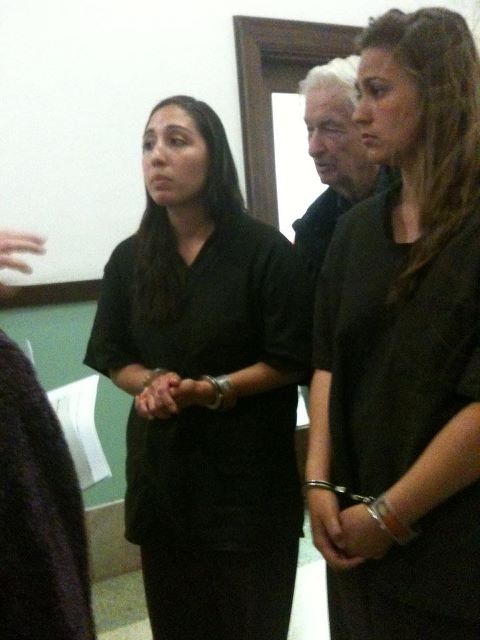 Here are the other members of the Survivors Team praying outside the courthouse for the two still in custody.

Here are some of the pics from the event including arrests. Go to the Survivors Facebook page for more photos, don’t forget to like their page and show them your support. 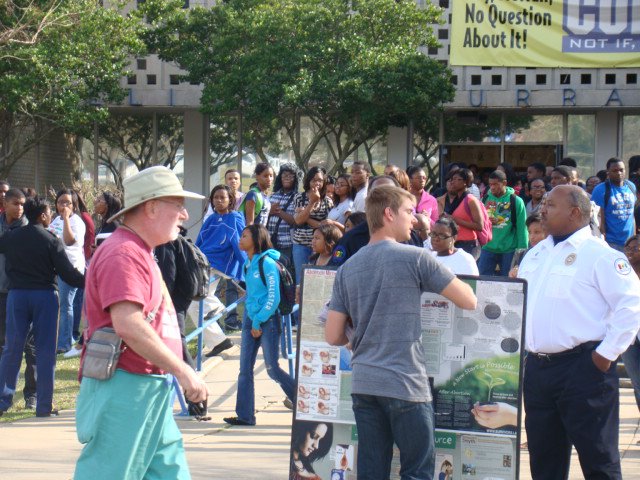