Stand True Pro-life Outreach 2013 Year In Review – How you can partner with us in 2014 as we fight to END abortion. 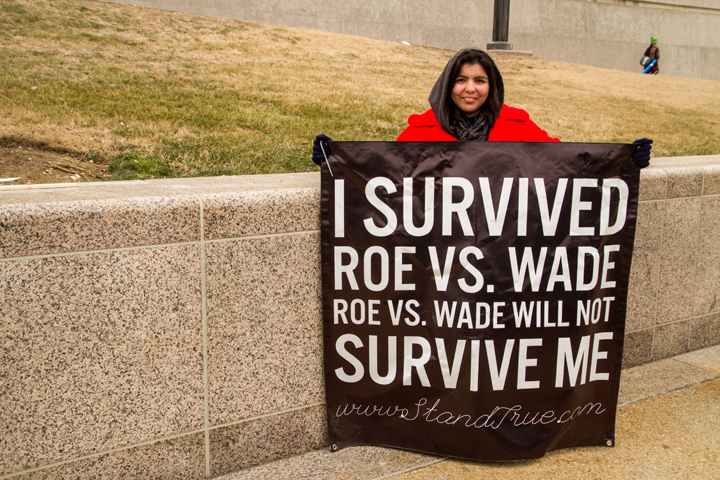 In January we entered into the 41st year of legalized child-killing in America, completing a full generation of decriminalized abortion. Reflecting on this horrific milestone, the theme of 2013 for pro-life youth became, “I survived Roe vs Wade, Roe vs Wade will not survive me.”

The year always starts with the March for Life in Washington, DC and this year was the biggest ever as we mourned the 40th anniversary of Roe vs Wade. Stand True was a major part of this event as we planned and hosted the annual March for Life Youth Rally the day before the March for Life. Stand True President Bryan Kemper was a featured speaker at several events and conferences around DC all weekend. Bryan focused on youth events and at several of them he led thousands of young people in the chant, ” I survived Roe vs Wade, Roe vs Wade will not survive me.”

This spring Stand True was also one of the key players in the now famous “tweetfest” which was started by Stand True President Bryan Kemper. Working closely with other pro-life youth organizations, we mobilized thousands of people to take to Twitter to shame the mainstream media for their lack of coverage in the Gosnell Murder trial in Philadelphia.

In less than 36 hours, the event page on Facebook for the tweetfest had grown to over 10,000 people. This momentum, paired with an article that day by Kirtsten Power, led to every major media outlet jumping on board to cover the Gosnell trial by the end of the day of the tweetfest. Anderson Cooper of CNN led his prime time show with a major story in which he called Gosnell’s abortion mill a “house of horrors.”

Several media outlets, including the Huffington Post, admitted to silence about this story. The hash tag #gosnell trended much of the day on Twitter as there were over 600,000 tweets using that hash tag in 12 hours with tweets from Patricia Heaton, Marco Rubio and many more. The following Monday the courtroom media section was packed and it remained so throughout the trial.

Bryan Kemper and some of the Stand True missionaries also spent many days in the courtroom towards the end of the trial where we were given a private tour of the evidence from the prosecuting attorney. We also sat in on and reported live from the courtroom during the closing arguments. Stand True’s social media team was amung the firstr to quote pertinent information and quotes from the trial.

Presenting Shirt to Jane Roe of Roe vs Wade

Over the summer Stand True hosted eight full-time missionaries at our headquarters in Troy,
Stand True also sent three missionaries to Austin, TX during the heart of the battle to pass the 20 week abortion ban where they assisted Abby Johnson and ran a social media blitz of the events. Our photos and videos of the activism of both pro-lifers and pro-aborts went viral and were widely used by the media. The Stand True team was able to record some of the crazy antics of the pro-abortion protesters and upload it to You Tube from the courthouse before anyone else.OH as part of our training and activism summer mission. The team received training from many national pro-life leaders throughout the summer. The Stand True mission team attended several major pro-life and Christian events over the summer including the National Right to Life conference in Dallas, TX. One of the highlights of the NRLC was when the team met Norma McCorvey — the Jane Roe of Roe vs Wade — and presented her with our popular “I Survived Roe vs Wade, Roe vs Wade Will Not Survive Me” t-shirt.

Father Frank Pavone of Priests for Life enlisted the Stand True team to help organize a prayer vigil outside the Medical Examiner’s office where Father Frank was going to deliver an official letter of request for the bodies of the babies murdered by Gosnell. The event took an unexpected turn as Father Frank, Reverend Patrick Mahoney and Bryan Kemper were denied entrance into the office of the Medical Examiner. We were locked out as we approached the office. The Medical Examiner refused to even take our letter and called the police to have us removed.

Bryan Kemper traveled to Rio in Late July to attend World Youth Day and network with pro-life youth from around the world. Bryan also gave a few pro-life talks while in Rio for groups who requested him to address their youth. 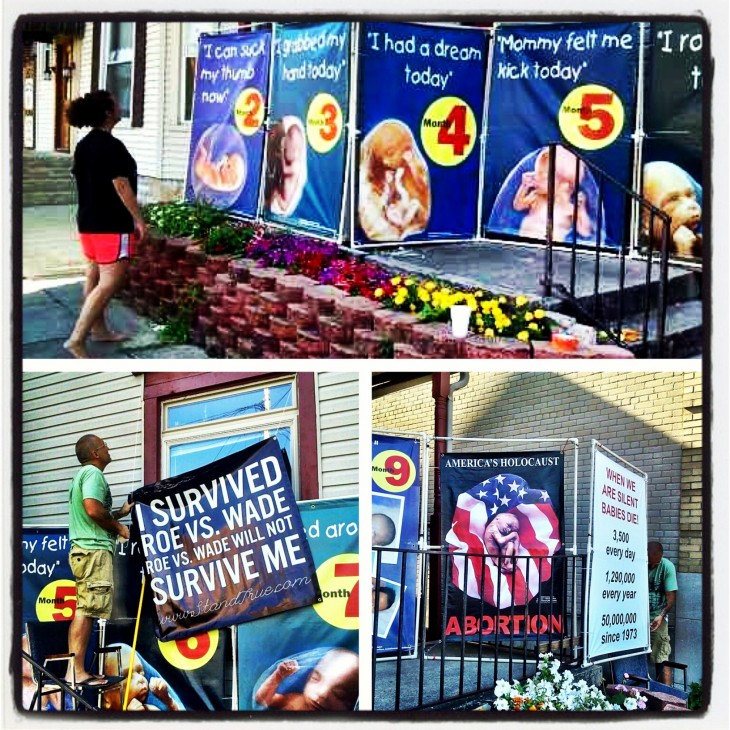 At the end of the summer the Stand True Mission Team was able to reach tens of thousands of people as our office was in the festival zone of the Mumford and Sons “Gentlemen of the Road” stopover in Troy, OH. Stand True spent two days inside the festival with a giant pro-life display that was seen by one member of Mumford and Sons as he sat on his motorcycle looking at the giant life development photos.

In the fall, the Stand True missionaries helped organize a follow-up event concerning the babies murdered by Gosnell. Stand True President Bryan Kemper spoke at a rally in Philadelphia followed by a walk and candlelight prayer vigil outside the closed-down abortion mill of Gosnell. The next day Bryan Joined Reverend Patrick Mahoney, Kristan Hawkins and other leaders in a prayer vigil in front of the Medical Examiner’s office which was covered by Fox News on a national level.

In October, Stand True once again hosted the Pro-life Day of Silent Solidarity in which hundreds of thousands of students took a vow of silence for a day in solidarity with the children being killed by abortion.

Stand True President Bryan Kemper traveled to Australia for a major speaking tour and was the keynote speaker for the March for The Babies in Australia, as well as several banquets. Bryan Kemper helped lead the March for the Babies with Bernie Finn, the Australian MP who organized the March. Bryan was in the heat of the action when socialist pro-abortion activists blocked the March and attacked the pro-life marchers where Bryan was knocked to the ground and kicked. Bryan was the first one to retake the stage that the pro-aborts had stormed when the police finally cleared them away. Bryan also fed many quotes and pictures to the Stand True social media team back in the US, where they broke the news of what was happening there in Australia. Once again much of the media from the event came from Stand True. 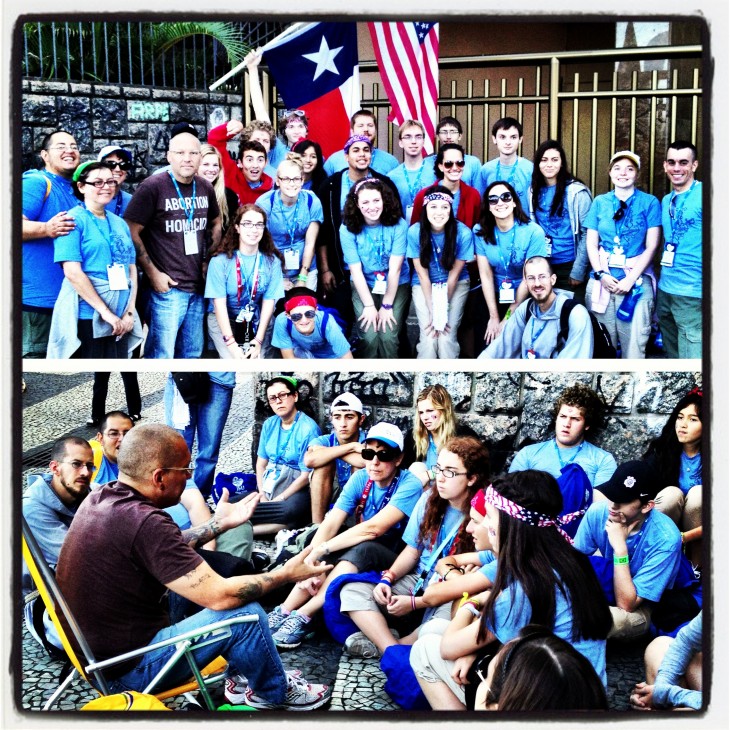 This past month there has been a lot of preparation for the March for Life and getting our inventory and resources ready for a new year. We have also been on the road to speak at several events, schools and conferences around the country, including the Louisiana Right to Life Conference and the “I Survived Roe” conference in Lapeer, MI.

While 2013 was our busiest year ever at Stand True, we know God has amazing things in store for us in 2014 as we fight to end the abortion holocaust. Our goal at Stand True is not to keep fighting year after year, but to put an end to the bloodshed and see protection for every single human person restored.

We need your help; we need you to continue to pray for our work and to support us as we go into the world and proclaim the Gospel and the pro-life message.

We need two things from you today.

1. Make the most generous end-of-year donation you can to help us prepare for this next year of battle.

Can you donate $25, $50, $100, $500 or any amount to help Stand True continue to educate, activate and equip this generation? – If you can donate please do so at https://donate.cornerstone.cc/?mid=STANDTRUE or on the donate button at the top of this page.

2. Make a commitment to standing with this ministry throughout 2014 in prayer and support. Please send Bryan an e-mail directly, to let him know you will be praying for Stand True and supporting us in 2014 bkemper@standtrue.com