Take Up Your Cross – How one night changed my life and started a youth pro-life revolution. 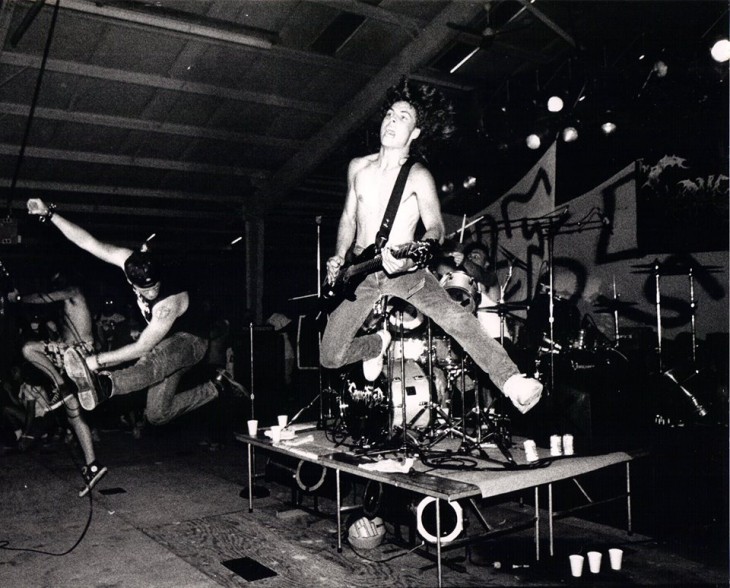 One August night in 1987 four young men stood on a stage and sang these lyrics: “the murder goes unseen, does only God and my heart hear the babies’ silent scream?”

In the crowd was a young man who only one week before had given his life to Christ after years of drug abuse and sin. This young man was in awe of this band that played the old school punk rock style music he loved but sang about God, life and real issues. As you may have already guessed, I was that young man in the audience.

After the band finished their set I walked over to their merch table and asked the girl working at the table, “what does Galatians 2:20 mean?” This was the verse they had printed on their t-shirts and it intrigued me.

Stacey, who was the drummer’s girlfriend (now Jim’s wife) walked me through the verse: I have been crucified with Christ; it is no longer I who live, but Christ lives in me; and the life which I now live in the flesh I live by faith in the Son of God, who loved me and gave Himself for me.

She explained to me what it meant to give up my old life and live my life for Christ as He is the reason I have this life. She talked to me about the difference between living in the flesh and living by faith. While 27 years later this is still something I strive to do better every day, she took those few moments to share this with me. This conversation is one I will never forget.

After talking to me about Christ, Stacey gave me a copy of the band’s demo tape, “Take Up Your Cross” and a t-shirt. I spent the next few weeks listening to that tape over and over again on my Walkman and one song really stood out to me, “Silent Scream”.

This song asked me the question, “does only God and my heart hear the babies’ silent scream?” As I listened to this song over and over I began to hear those silent screams. I knew in my heart that abortion was killing babies and I wanted to say something about it.

It started for me with just getting pro-life t-shirts and stickers. I also had a baby in the womb painted on my leather jacket. I was a walking pro-life billboard wherever I went.

Fast forward a few years and I was sitting in a restaurant at a men’s prayer breakfast with the singer of the band Precious Death when he invited me to a pro-life event that day. I was excited to go but could not have imagined what I was going to see when I got there.

I got out of Chris’s car and stood in awe, as there were literally hundreds of both pro-life and pro-abortion activists standing in the street and on the sidewalk surrounding the abortion mill. I saw pro-abortion activists screaming in the faces of the pro-lifers who were praying. They were screaming vile, sexual things about Jesus and spitting. I saw a cross and a topless woman on that cross, mocking the crucifixion of Christ.

A young woman from my church and her mother saw me and asked me to stand next to them for protection. Elisa had a look of relief on her face when I stood next to her mom to shield her from those around her.

A short while later I walked off towards the crowd at the door of the abortion mill and because of my size, Mohawk and tattoos the pro-aborts thought I was one of them and asked me to go guard the door. They escorted me to the door right as a woman was being brought in to kill her child.

My friend Ruthanne used to drive me to church every Sunday and tell me stories about Operation Rescue and how they would sit and block the doors of the abortion mill and pray as the sidewalk counselors would talk to the women seeking abortion. I thought about what she said and when they put me the door I simply grabbed the handles and stood there.  The pro-aborts started screaming and yelling and punching me as they tried to remove me from the doors. A few minutes later the police were escorting me out in handcuffs.

Jeff White of Operation Rescue was able to get me out of being sent to jail that day, which did not matter to me because the young lady who was on her way in left and did not come back as far as we know. My friends later showed me a video they were taking from outside of the giant crowd. First you saw the young lady come back out and them just leave and then me being led away by police. I still can hear that voice on the videotape: “What are the police doing? Oh, they have someone, OH my G*d it’s Bryan”.

My friends explained to me that they go to these events almost every weekend and many times they see babies saved from these rescues. I called my boss later that afternoon and told him I can no longer work on Saturdays, I was going to spend them fighting abortion with Operation Rescue.

After a year or so of doing this causally on the weekends I went to see Jeff White talk at a local church about a new missionary program Operation Rescue was starting called Missionaries to the Pre-born. I thought to myself that I would take one year and do this and then I can say I have done my part for the babies. I was planning on starting a Christian punk band when I finished my year commitment.

In the fall of 1993 I was traveling to Los Angeles with the Missionaries to the Pre-born which is really the pre-cursor to The Survivors of the Abortion Holocaust. I spent that morning going into abortion mills undercover with what we called truth teams. I would take a girl inside and we would ask for a pregnancy test. She would fill the back room and I would fill the lobby and magazine rack with pro-life literature.

Things started off very dark that fall morning as I approached the abortion mill. There was a man on the corner passing out coupons in Spanish for $40 off an abortion. This particular mill was geared towards illegal immigrants.  When we got inside my friend went into the back room and I started filling the magazines with Spanish literature.

She was taking way too long and I decided to walk up to the counter to ask about her when a door opened behind the counter and I saw a young woman lying on her back as she was getting an abortion. I remember the look on her face and the tears in her eyes as I was witnessing the murder of a human being and a young woman being emotionally damaged for life.

My friend came out seconds later and we ran out of the mill meeting a few other pro-life friends who were looking for us. I remember saying to Troy Newman and the others to follow me and we ran down the hall yelling “LA MIGRA!” (immigration) as all the women waiting in the hallway and waiting room ran out of the building.

One woman did not run, she was the young woman who I saw on that table; it was too late for her and her child. I wept most of that day, asking myself how could I have ever said I will just do one year and say I have done my part.

That night I cried out to God, asking Him why this bloodshed continues. I wondered where the church was? Where were His people as these precious little babies were being slaughtered? I heard a voice that night saying, “Bryan save my children”. I knew from that moment that I could no longer just live my life the way I wanted to as my neighbors where being slaughtered every day and the world and the church pretended not to see this holocaust.

From that night of prayer God gave the vision to start Rock for Life, which then became the catalyst to a youth pro-life revolution. The first Rock for Life concert was talked about on MTV and was a huge success. Mark, who was the lead singer of The Crucified, was there that night and a young woman decided to keep her baby after hearing the pro-life presentation given from stage.

Later that year my friends Robbi, Kate and Matt joined me on tour with the secular concert festival, Lollapalooza, with a pro-life booth in the center of the festival. It was an amazing trip as we saw God provide in miraculous ways and protect us when the lead singer of the band Green Day told the crowd to beat us up and destroy our booth.

I started events like the Pro-life Day of Silent Solidarity, which saw students from thousands of campuses in dozens of countries standing up for life and thousands of babies being saved.

I founded Stand True Pro-life Outreach, which has now become the youth outreach of Priests for Life, the largest Catholic Pro-life outreach in the world.

All of this not because of anything I have done or achieved but because God used me. This happened because I was willing to listen to the call of Christ on my life when a young woman named Stacey took the time to explain Galatians 2:20 to me. This happened when Jim, Mark, Mark and Greg took up their cross and their instruments and followed Christ’s call on their lives.

Imagine what chain of events can be sparked when you follow Christ and take up your cross. Imagine what He can accomplish when you surrender your life to Him and allow Him to use you.

Will you take up your cross today? Matthew 16:24 – Then Jesus told his disciples, “If anyone would come after me, let him deny himself and take up his cross and follow me.”