To start off I have to show you something that should always alarm us: Planned Parenthood likes his so-called “accommodation” – http://www.lifenews.com/2012/02/10/planned-parenthood-pro-abortion-groups-back-revised-mandate/ 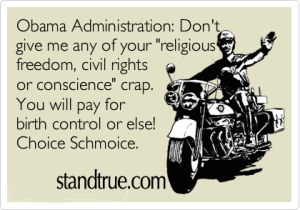 We have to understand what the actual battle is here: it is about our constitutional and our conscience rights.  This is not just about whether someone is for or against the pill; it is more about the government forcing people to pay for someone else’s birth control.

As of yesterday all companies would be required to pay for contraception and abortion-causing drugs to be included in their health plans.  Some religious organizations would have been given one year to “adapt” to this policy (not Stand True or Priests for Life; we would not even qualify for that one year to adapt).

What the Obama administration actually just did in their “reversal” or “accommodation” they announced today is to say that now it is the insurance company who is required to pay for contraception and abortion-causing drugs and offer them for free to all women.  The organizations that are opposed to paying for them will have no choice in the matter; the insurance companies they use will still cover these drugs.

Religious liberty is thrown out the window, conscience is trampled and the rights of the insurance companies are destroyed. Freedom does not seem to be a word that the Obama administration comprehends.

Think about this: the pro-abortion side has always cried for Christians to “keep your rosaries off my ovaries”, yet they want Churches and religious organizations to fund their sex lives. Do you see the irony in this?

Imagine if the President mandated that all companies pay for every employee’s Bible, religious supplies and gas money to get to church. It is ludicrous to think we can force anyone to pay for this, so why is it ok to force companies to fund its employees’ bedroom activities?

Those who call themselves pro-choice should be up in arms; they should be screaming at the top of their lungs about this violation of choice. The problem is that they are NOT pro-choice; they are pro-abortion and they can care less about the choices or beliefs of Christians.

Whether you believe in contraception or not, you must be outraged at what the Obama administration is doing. The rights and liberties of all Christians and religious people are at stake right now and we must stand against this injustice.

“You don’t adapt to injustice; you oppose it.” Fr Frank Pavone

Once again we see the beast that is the abortion industry and its champion, President Obama, trying to strong-arm Christians and pro-lifers.  Last week they acted like the mob or a school-yard bully when they tried to destroy the Susan G Komen Foundation over 1/6 of 1/1000 of Planned Parenthood’s budget.

We must be more resolved to stand up, be a voice and shine the light of truth in these dark times.  We must stand united together as we usher in a culture of life.  We must break the chains of apathy and let our roar be heard.

I, for one, would sooner be handcuffed and taken to jail before I allow any insurance coverage that included abortion-causing drugs to be given to any employee.

Also read this article by the Christian Medical Association on the matter: http://tinyurl.com/6wvy3jg