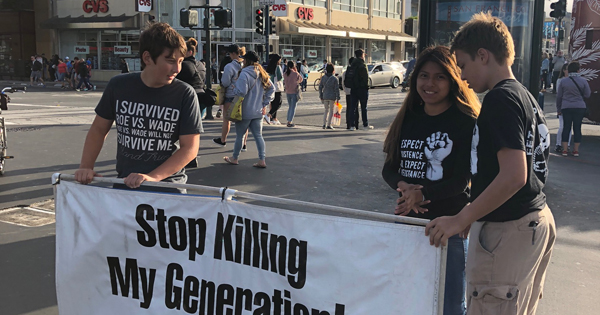 My son and I recently returned from two weeks in San Francisco where he attended and I helped lead the Survivors Pro-life Training Camp. As a father I cannot be any prouder of my son right now as I watched him in action standing against abortion and being a witness for Christ in one of the darkest more liberal cities in America.

There is so much to talk about from camp but I want to focus on one particular chain of events that took place at camp. On a Friday morning my son was sidewalk counseling at a Planned Parenthood in Downtown when a truck pulled up in front of the building. We quickly realized this was a “medical waste” company there to pick up the bodies of the aborted children who were killed there.

I started to live stream from the sidewalk as we confronted the company, asking them if they knew what they were picking up. The man was visibly upset on finding out what he was picking up but did not want to talk to us, he was worried about his job. I pleaded with him, asking him if we can help find him a new job. He threw the containers in the back of the truck and drove off.

The following Monday we took the campers to the main headquarters of the company and a few of us went in to talk to the owner and ask him to stop doing business with Planned Parenthood. After talking with him for over 40 minutes he told us he would consider what we said and get back to us.

A few days later we received a phone call from him asking us to come back and talk to him. He met with us and shared his heart about how much he thought about this situation and sought counsel from many people. In the end he agreed to cut all ties with Planned Parenthood of NorCal, an account worth over $300,000. He mentioned that as of right now there are no other companies they can use and may have to stop doing abortions until they find a new company. Victory!

We know that Planned Parenthood will do all they can to remain open but we have made it harder for them and will continue to put pressure on any company who cooperates with child killing. One of the biggest lessons for these young pro-lifers was that persistence and hard work can pay off when fighting this battle. They were so inspired in their work and the outcome of this, they truly came away ready to continue the fight to end abortion.

I will write more soon about camp and share some other stories but I wanted to share this with you as the two week time frame he gave us is upon us and his contract is ending this week. Please pray for Rich and the rest of the staff at Barnett Medical Services as they make this huge sacrifice to break ties with Planned Parenthood.

I want to also thank Survivors and Pro-life San Francisco who were such a vital part of this camp and victory.

Urgent: While camp was a huge success, we are now in a tough spot after two weeks doing non-stop activism in San Francisco. As of today the Stand True bank account is actually $186 in the negative from unforeseen expenses from camp. We need your help TODAY!

Please consider making a donation to Stand True today as we are moving full steam ahead with plans for the 2018 Pro-life Day of Silent Solidarity. Donate at https://give.cornerstone.cc/Stand+True today and help us catch up today.