What I saw and heard during my two days at the murder trial of abortionist Kermit Gosnell: 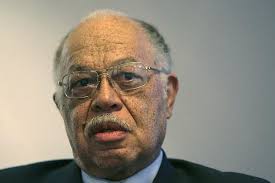 I recently spent two days at the murder trial of Kermit Gosnell, the abortionist accused of the murder of seven babies born alive and one woman. Gosnell would take babies who were born alive after botched abortions and snip the backs of their necks to finish the job. You can find out all about who Gosnell is and what he did at http://www.whoisgosnell.com

I arrived at the courthouse on Monday morning to find out the trial would be postponed for a day because of the defense attorney being sick and in the hospital, so there was an attempt to find a Fresno attorney. Father Frank, Janet Morana, Alveda King and I were able to talk to the prosecutors who allowed us to view and examine the evidence that was taken from his “house of horrors” abortion mill.

As I walked around the filthy, rusty and utterly disgusting equipment I wanted to vomit. I could not believe this stuff was taken from a so-called “medical clinic.” The table that the abortions were performed on looked like it was straight out of a horror movie, as did the suction tubes and ancient ultra-sound machine. The recliner in which women sat to recover from the abortions was stained and tattered and not fit to sit on. Earlier that day the prosecutor almost sat in the chair and she was visibly upset that she came so close to doing so.

On Tuesday I met up early in the morning with Alveda King and went back to the courtroom for the opening of the defense’s arguments. The day opened with defense attorneys arguing for the acquittal of all the charges to the judge, without the jury present (that is how defenders for white collar crimes act).

Gosnell’s attorney was visibly conflicted as he went back and forth between calling the victims either a fetus or a baby. At one point he yelled out, “These infants, fetuses or whatever you call them.” I wanted to scream but had to bite my tongue as I listened to this dribble.

It suddenly became very personal to me as the defense attorney began to address the abuse of a corpse charges that Gosnell was facing for the baby parts found in jars in his house of horrors. When the attorney started spewing about how these were not real body parts because they were not real humans yet, I began to tear up. He talked about how these babies were not really human and all I could think about was Benjamin Davis, my son who we miscarried two years ago. Benjamin was a real person and was given a real funeral; he was an actual human being just as these babies were.

The prosecutors at one point were discussing a time when after the botched abortion, Gosnell also botched his “snipping.” “It was laying there with a hole in its neck, it was moving and breathing, it was alive,” declared a clinic worker about one of the babies Gosnell murdered. Sitting there listening to all of these quotes and testimonies was one of the most difficult things I have ever done, but it was important for me to be there.

Gosnell (as you notice I refuse to call him a doctor) just sat there through all of this testimony without emotion or reaction. He just sat there taking notes and smirking as he looked around. He was guarded by an armed police officer at all times as he has been in custody for almost two years. It makes my skin crawl to think that this man could possibly be released and be back in practice if he is found not guilty.

I am also heartbroken for this man and the day he will face our Lord. I prayed for his soul and have been asking my friends to do so also. I know how despicable I was before I knew Christ and I also know Gosnell needs that hope of Christ just all of us do.

This Monday the attorneys will present their closing arguments and then his fate will be given to the jury to deliberate. Christian leaders will be outside the Courthouse on Monday leading a prayer vigil for the verdict and for Gosnell himself.

We need your help to get me back to the Gosnell trial on Monday and Tuesday. It is important for me to join other national leaders at the trial for the closing arguments and for the prayer vigil. We simply need help with the cost as it is not in our budget right now, can you donate $25, $50, $100 or whatever you can to help get me there?

Will you help get Bryan Kemper to the Gosnell trial? Please make a donation today, click here HTTPS://DONATE.CORNERSTONE.CC/?MID=STANDTRUE or on the donate button on the top of this page.